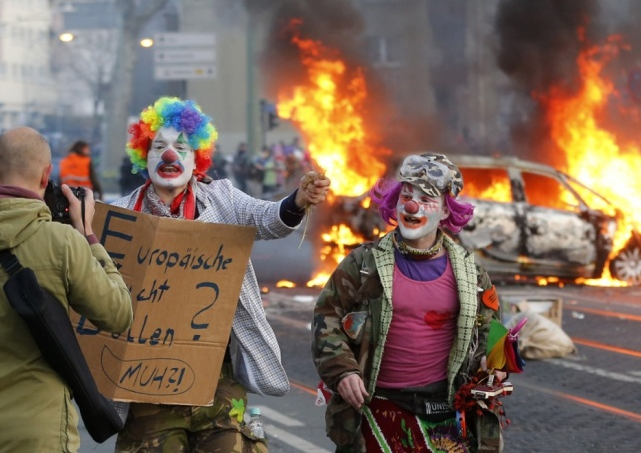 Today as George Osborne delivered yet another austerity budget, transferring bank debts to the shoulders of the working poor, EU elites gathered in Frankfurt for the opening of the new European Central Bank (ECB) building.

Debt Resistance UK marked the occasion by reminding the City of London that we have not forgotten those who caused this mess, but are yet to suffer the consequences!

Activist Christopher Prince said:
“I saw the event on facebook and came down to join Debt Resistance UK in solidarity with Blockupy, and to put pressure on Goldman Sachs and the financial system in Europe that is completely corrupt. 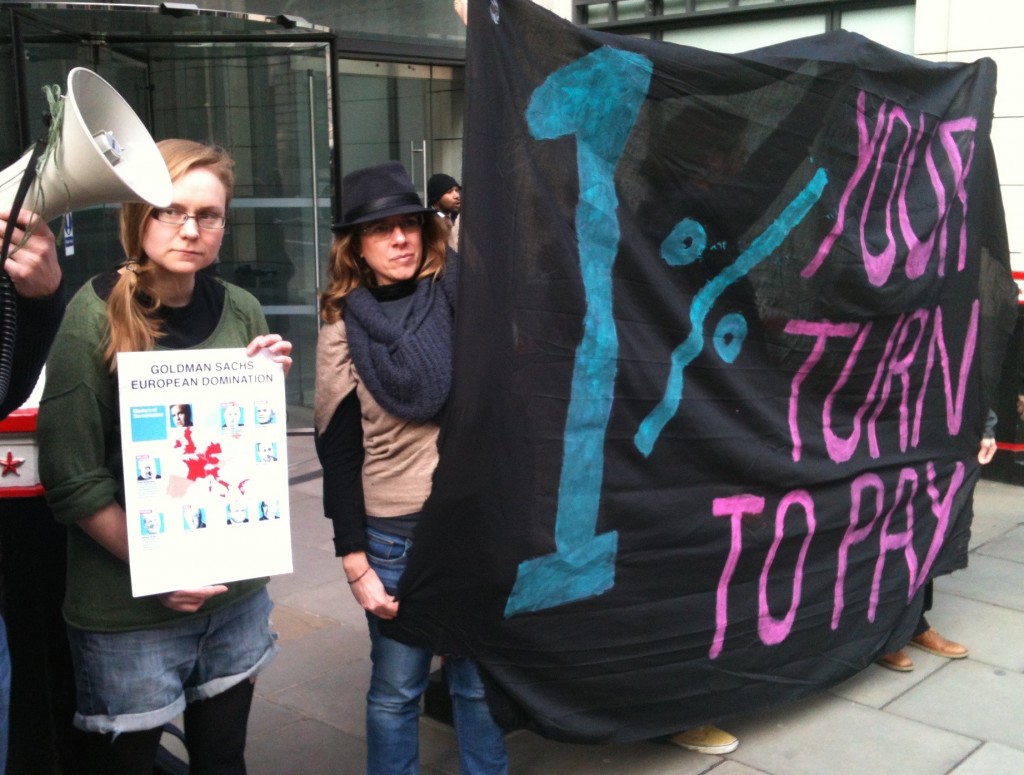 Activists assembled at the steps of St Paul’s Cathedral and marched down Fleet Street to the “Vampire Squid” Goldman Sachs’ offices, in solidarity with Blockupy actions throughout the day in Frankfurt. For details see http://blockupy.org/en/ and follow #blockupy #18M

Seven years after the financial meltdown which pushed 100 million people world wide back into poverty, the 1% are richer than ever. For the rest of us, the crisis is far from over: we’re still paying for the bank bail-outs with cuts to healthcare, education and social care.

While housing bubbles and top earners’ wage inflation create the illusion of recovery, most of us are unemployed or have part-time jobs and wages that are stagnant or in decline.

Contrary to what politicians and compliant media would have us believe, UK unemployment is not the fault of immigrants.

Banks and financial institutions based in London have a long history of reckless lending that has devastated economies and societies across the globe. Famously Goldman Sachs fiddled Greece’s accounts while current ECB President Mario Draghi was in post at Goldman, precipitating a humanitarian disaster and the deepest economic recession since the 1930’s. 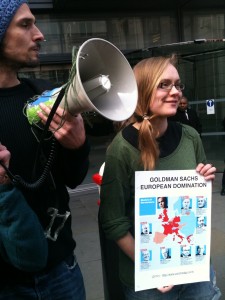 As European elites gathered in Frankfurt to celebrate the flashy new headquarters of the secretive, undemocratic European Central Bank, history will record they were met by blockades of twenty thousand activists from across Europe.

The ECB printed billions of Euros for Greece to pay its creditors. But little of this money stayed in Athens. At least 90% of it went straight back to Frankfurt, Paris, and to banks in the City of London.

While Greece faces ECB ‘sponsored’ austerity, the ECB prints money and profits from buying billions of euros of repackaged loans from Eurozone Banks each month. Yet the ECB refuses to reveal which banks they are supporting, or to whom these banks have lent money.

Back in London, Debt Resist UK connected the dots between ideological austerity at home and abroad, paying a visit to the square mile financiers who caused the crisis, and continue to profit from it to this day.