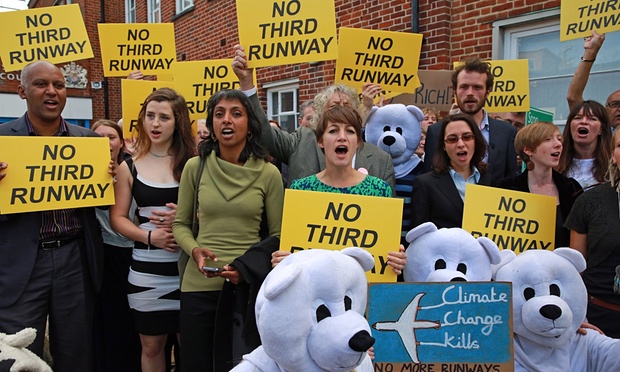 Last July, 13 climate activists from group Plane Stupid blocked a runway at Heathrow to protest the building of a third runway. They were found guilty of aggravated trespass and being airside unlawfully, and were told by a judge to prepare for an immediate prison sentence when they return to court for sentencing on Wednesday 24 February.

Aviation is the fastest growing source of greenhouse gas emissions in the UK. If the sector is to grow as projected – including the expansion of Heathrow – this alone will mean the UK cannot reduce its emissions to levels preventing climate change would require.
Climate change threatens all life on planet. It is already with us: its impact includes biblical floods, record temperatures, escalating storms and droughts year after year. But even if absent from the headlines, the ones who suffer most are those living in the global South, in countries already impoverished by the capitalist and imperialist system that transfers wealth to the top on both global and local levels. The inability of rich countries to combat climate change is a direct consequence of corporate lobbying and the revolving door between the government and financial and fossil fuel companies.

We express our solidarity with the brave activists from Plane Stupid. You are fighting for the future of all of us!