We cannot keep sleepwalking through austerity 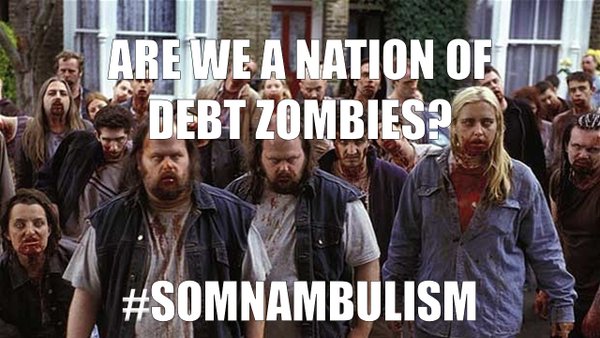 Today sees the launch of a new campaign by the ODG (Observatory on Debt in Globalisation). #Somnambulism shows us how debt is devouring our societies, affecting our physical and psychological conditions and breaking our community by imposing an illegitimate and unsustainble burden. From low income countries indebted to rich countries, to families or students not able to pay their loans, debt is a problem that affects us all. Join us in our struggle against this silent epidemic.

We cannot keep sleepwalking through austerity

Social housing is under attack. The government is selling off our NHS to corporations. Nurses, doctors, teachers and other vital public sector workers are expected to work more hours for less pay. Cameron is attacking cancer patients, the disabled and other vulnerable groups who are losing necessary state benefits. Grant cuts and increased tuition fees mean that university education is only accessible for the 1%. Workfare programmes and cuts to unemployment benefit leave people working for free or searching for jobs that are not there. Real wages are stagnating. Not getting paid enough to live and not accessing what should be public goods, many of us are getting further and further into personal debt.

This is not a crisis: it is the system.

Britain’s debt burden – the excuse for austerity – is mainly due to massive corporate giveaways. In recent years this has included the bank bailouts, QE and corporate tax avoidance. Additionally, bankers and the 1% are allowed to get away with scandal after scandal; LIBOR rigging, HSBC mis-selling, rigging the gold market, rigging commodities markets… the list continues.

The system is dysfunctional. The economic model we live in is based on infinite growth in a world with finite resources. Wealth is concentrating with the richest few. But the government always has more money for war, the oil industry, fracking and other schemes to make the richest more rich, whilst destroying our common resources. Society and the planet cannot carry on with business as usual.

Why is society sleepwalking?

All this may not come as a shock. But that means it is shocking to consider how the rich and powerful continue to get away with this.

Many of us are so focused on surviving that questioning the system is itself another challenge. We work long hours just to make ends meet or pay off debts that weigh on us. Another problem is that neoliberalism atomises us into individual units, so we feel alone. The world can feel impossible to change.

But this is not the whole story. Perhaps the main reason that the 1% have got away with so much connects to how much power they have to shape the narrative.

Since Thatcher’s days, a core phrase has been “there is no alternative”. This dogma gets drummed into us all the time, just as we are told to consume and obey, through a barrage of pro-corporate advertising and authority. 80% of the corporate press is owned by 5 billionaires – no wonder Britain has the most right-wing press in the whole Europe. The governments of Thatcher, Major, Blair, Brown and Cameron have all been in bed with bankers. Even the BBC is run by Rona Fairhead, who also heads HSBC, the bank for terrorists and drug smugglers. It’s time to end this monopoly over imagination!

But the fightback for justice – economic, social or environmental – is there. Ever-increasing numbers of people are coming to recognise the shaky and unfair foundations on which our current system is built. People are seeing the myth of austerity for what it is (a robbery), and are beginning to take action to challenge it.

Debt Resistance UK are starting to audit debts so that illegitimate debt at the local government level can be challenged, instead freeing money for services that are so urgently needed. Banks are charging local authorities extortionate LOBO loans at rates sometimes over 7%.

Debt Resistance UK is also working towards a national citizen’s debt audit, which aims to uncover illegitimate and unjust debts and demand these are cancelled.

We will also continue to work in solidarity with other countries to challenge their illegitimate debts, closely with the student movement to free education from fees, and to bring debt injustice into the conversation of all forms of injustice.

We are very much inspired by work against illegitimate and odious debts in the global South, and by the Spanish debt groups that made this film. In Ecuador in 2008, a national debt audit meant that the country could stop redirecting money from vital public services into debt repayments. In Spain, citizen networks have reclaimed local councils and Madrid will be the first European city to undertake a citizen’s audit of its debts.

There are many networks, organisations and networks fighting against the UK government’s austerity agenda and showing that there are plenty of alternative systems. We have great respect to those leading the fight against the government’s programme of handouts to the rich and austerity for the rest. There are of course many more than we can list here – sorry to everyone we leave out!

Radical Housing Network : an umbrella for the dozens of struggles fighting for the right of housing, such as Focus E15, Eviction Resistance and many local groups.

Disabled People Against Cuts and all the others standing up for disabled people’s rights.

Black liberation groups and activists, such as Black Dissidents and everyone involved in the #BlackLivesMatter movement.

Feminist and women’s groups, from Sisters Uncut resisting cuts to women’s services to all those who run feminist spaces or fight for women’s liberation within other struggles.

Anti-fracking and climate change movements, who are asserting our need to live on a stable planet.

Anti-privatisation groups such as People vs PFI and SaveOurNHS.

Progressive NGOs and think and do tanks, such as Common Weal, NEF, Jubilee Debt Campaign, War on Want and Global Justice Now.

Free education and student protests, like UCL Cut the Rent, Justice for Cleaners, National Campaign Against Fees and Cuts and Student Unions who work towards a fairer University.

Non-corporate media, from established platforms such as New Internationalist, Red Pepper and Open Democracy, to newer projects such as Real Media, Common Space and the Canary.

One thought on “We cannot keep sleepwalking through austerity”