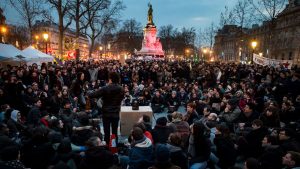 Nuit Debout isn’t like Occupy or the Spanish 15M-Indignados, nor is it like the Greek Aganaktismeni, the Turkish Gezi or Mexico’s YoSoy123, nor like any other previous movement, although it can be considered like the rest as part of the recent wave of post-2010 movements. What it does have are similar defining characteristics such as the use of the Internet and social media to communicate, coordinate, and speak to society.  Every context is unique and singular and defines the complexity of each movement in its social, political, economic, and historical situation.

Hoping to read the analysis that will be published on the new (and much-awaited) French movement, I’ll share my ideas taken from what I’ve observed during my two years in France and my experience participating in the initiation and evolution of the Nuit Debout Place de la République movement in Paris.

As an activist in the 15M constellation in Barcelona, when I moved to the “country of the revolution” I set about contacting movements and collectives in order to participate and be active. I found something quite different from what I expected: interesting collectives, but with a tendency to work in their own affinity circles, not collaborating much with other groups, and with little interest in what was going on around them in Europe and the world. Their narratives and structures echoed other eras and their use of the Internet and social media was basic, with a political message that didn’t awaken significant interest in the street nor in younger generations.

It was key for me to understand that France’s historical time is very different from ours in Spain; their baby boom came after World War II, ours after the dictatorship. This is to say that currently the bulk of the French population is around 65 years old. It is a generation who fought in their day, but who, up to this point, hadn’t passed the baton to the younger generation.

Until Nuit Debout came about.

Nuit Debout’s identity as such was actually shaped out of work of those who launched its social networks (chosen from the many slogans planned; such as “Nuit Rouge [Red night], Rêve Générale [General Dream] or Jour et Nuit Debout” [Stay up Day and Night]). These were people from the new generation, who are part of what is now being called the “networked society”. We created an editorial line for #31mars that sought to help catalyse the moment, with the intention of breaking the fear imposed in France by the shock doctrine (a society in fear cannot scare the powers) and to reach society (not only those already engaged in struggles) with a renewed narrative.

The group using the social networks was formed two weeks before #31mars, composed of people from different collectives and trajectories (and with a majority of women), who in some cases had not previously met. Now it has grown thanks to new additions to the team not just from Paris but from around the country. Its channels and tools have also been diversified by coordinating with the organic, rich, and very diverse network of distributed media initiated by Nuit Debout (Agence debout presse, Bulletin Debout, Gazette Debout, RadioDebout, TVDebout, Micro Debout, a team of streamers and many others).

The goal of “hacking” the traditional press and inserting the narrative of those who make the Nuit Debout was achieved from the first moment on #32mars and the influx into the streets was massive, giving way to a process of social and political transformation which is still underway.

Are social networks key for a movement?

Of course; but a movement is forged by collective work, by their strategies of the struggle and political incidence, the capacity for social transformation and the precious virtue of finding a way to bring the movement’s political message to society to empower people and inspire them to action, whether through support or by direct involvement. Communication and tools, among them social media, are a fundamental pillar for this (though we must know their limits, be aware of who owns them and look after the security of our data). These channels must be cared for and worked for, and they grow along with the message they carry and the solid work behind them. They attract different communities depending on the nature of the conversation and the narrative used.

And what is happening with Nuit Debout’s work on social media?

As I understand it Nuit Debout has two souls; two separate groups of people who understand the political fight differently and therefore communicate differently. Logically one does not see itself represented in the narrative of the other and each has created its own communication channels.  There is no risk of appropriation, what happens is that one part is claiming control of the channels it did not create, even having their own. This group did not show interest in participating when the creation of these channels was proposed to them, before the outbreak of the movement, nor did they participate in them during the first days when the workload was crazy. They saw no interest for example in creating a Twitter account. At the end of the day, what was missing was collaboration from the beginning or simply the understanding that each part is capable of reaching different communities due to the different connections they make, and when added together the two parts are stronger than they would otherwise be.

The 15M movement is still there, strong, fighting for social transformation and winning victories.

From the beginning, activists from 15M have been involved in the evolution of Nuit Debout’s networks, both directly and remotely. We have been working side by side, sharing knowledge and learning from each other, helping with communication and with the use of social networks. 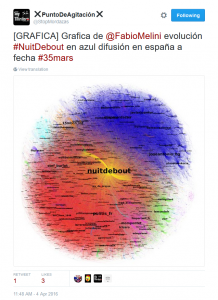 At 15M we also had a case of illegitimate appropriation. It happened in the collective Democracia Real Ya (DRY). To make a broad comparison, we could say that DRY is equivalent to Convergence des Luttes. The collective organised, creating nodes all over Spain, after the massive call to participate (for over more than 5 months) in the organisation of the great demonstration on May 15th, 2011. It was this mobilisation that (inspired by the Arabic revolts) spontaneously gave rise to more than 100 month-long camps throughout the country. This turned into the 15M movement (or as the media called us, “Los Indignados”).

A few people from the DRY collective appropriated the Facebook page, with more than a half million followers, closing access to others. At that stage, a year after 15M broke out, DRY was only one of multiple actors in the movement. 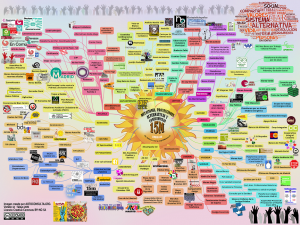 At 15M we also had a case of illegitimate appropriation. It happened in the collective Democracia Real Ya (DRY). To make a broad comparison, we could say that DRY is equivalent to Convergence des Luttes. The collective organised, creating nodes all over Spain, after the massive call to participate (for over more than 5 months) in the organisation of the great demonstration on May 15th, 2011. It was this mobilisation that (inspired by the Arabic revolts) spontaneously gave rise to more than 100 month-long camps throughout the country. This turned into the 15M movement (or as the media called us, “Los Indignados”).

A few people from the DRY collective appropriated the Facebook page, with more than a half million followers, closing access to others. At that stage, a year after 15M broke out, DRY was only one of multiple actors in the movement.

Try to find DRY inside the 15M movement’s constellation.

In a recent decision, the National High Court has decided in favour of the movement and against Association DRY.

But this did not destroy the 15M movement, because it is a diverse movement with many communication channels, and each collective that is part of it may have multiple ones. Groups collaborate and interact, joining when needed. This is the advantage of a distributed network; the loss of one channel of communication (though painful) does not kill the movement and in the end the true strength lies in the sum of all, our coordination and collaboration.

When opening Nuit Debout’s social networks, we shared this experience with the media centre’s team at Nuit Debout so that they may avoid the same thing happening to them and take necessary steps to prevent it. Among these is the diversification of channels in order to avoid depending on only a few to represent us.

What, then, is the “lesson” I would share with Nuit Debout?
Amplify your Telegram debates to the public sphere, both physical and digital (to escape the risk of endogamy), and open more communication channels; diversify your network and help social debate get richer in order to fight the fear discourse. Open more Twitter accounts, both personal and collective, to reach more people, the media and politicians.

There is far more knowledge and experiences we could share from other movements with Nuit Debout, but surely they will surprise us with a different path that is entirely their own.

But there is one thing I am certain; Nuit Debout has already begun to transform France.

The printing press was a revolutionary technology for past movements, as the Internet is for ours.