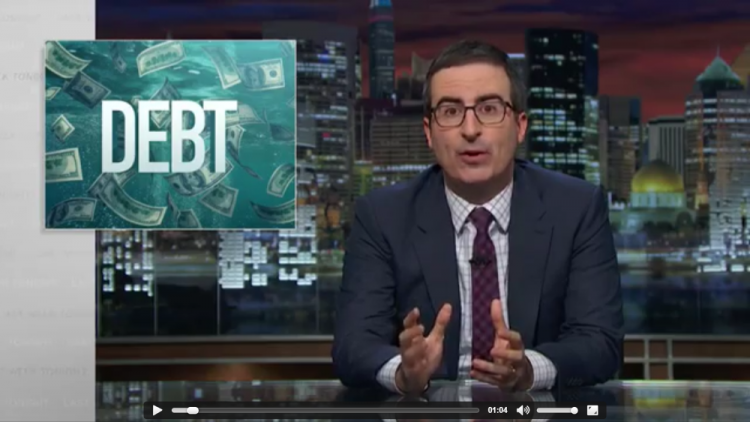 After a lapse last week (apologies – I was out of the country with a dead laptop battery), normal service resumes on our weekly round-up of debt-related stories from around the web. Please send your links to info@debtresistance.uk, tweet them @DebtResistUK or drop them on Facebook.

Last Week Tonight with John Oliver: Debt Buyers (HBO, YouTube) [Video – blocked in the UK, to view via a proxy server try this link] John Oliver is an English satirist and host of the US current affairs comedy show Last Week Tonight. The personal debt crisis has been a big theme for the show recently and in this episode Oliver’s team bring attention to the role of predatory debt buying companies who purchase consumer debt for pennies on the dollar and then pursue debtors for the full amount. TWN set up their own debt buying company, purchased nearly $15million in medical debt and then forgave it on air.

Who’s Afraid of Occupy? The John Oliver Show Erases Debt Resistance (Debt Collective) Debt Collective is an offshoot of Strike Debt, the inspiration for Debt Resistance UK. Apparently John Oliver’s researchers made much use of Debt Collective’s expertise in debt buying, gained as part of their Rolling Jubilee project which has so far abolished nearly $32million in US consumer (including medical) debt. Aggrieved at the lack of attribution in the broadcast show, Debt Collective here call out John Oliver for adopting a weak, reformist position, rather than challenging the legitimacy of the cancelled debt.

Councils spending more on servicing debt, NAO highlights (PublicFinance) A new report from the National Audit Office shows that a quarter of all councils are spending at least 9.9% of their budgets on debt servicing. Our research into LOBO loans has shown that a large part of this debt servicing cost, which exacerbates the effects of austerity measures, is due to one-sided loans that councils have taken out with banks.

Steve Keen: the Maastricht Treaty is a suicide pact for European leaders (Credit Writedowns) Post-Keynsian economist Steve Keen explains how the Maastricht Treaty (a major building block of the EU) had austerity baked into it from the start, by limiting the ability of national governments to run deficits and increase the national debt in times of crisis.

Osborne has accidentally exposed how ridiculous his austerity cuts were through his post-Brexit Budget threats (Independent) – Joel Benjamin skewers Osborne’s contradictory statements on whether raising taxes for the wealthy would generate revenue. Explodes the austerity myth. Again.

The UCL Rent Strike (Real Media) [Video] – Unlike last week’s link on the rent strike, this report from Real Media puts the link between high rents and student debt up front. It also highlights the trend among institutions of marketing university not as education, or even as a route to better paid jobs, but as a ‘student experience’.

Wolf Richter: These Debt Slaves are the Government’s Largest Asset Class, and It will Haunt the Economy for Years (Naked Capitalism) – US-centric, but instructive.

And now, price deflation in India and China? (The Hindu) – The dynamics of debt deflation, ‘whereby the real value of debt and of debt servicing keep rising because of falling prices, and make it harder for debtors to deleverage or to increase their spending’ has now seemingly spread from western economies to the ‘emerging’ economies whose growth was supposed to drag the world out of recession.

Greek central bank warns on growth-harming taxes (FT) – The neoliberal ideologues at the Greek central bank speak out against Syriza’s choice of taxing high earners rather than further cutting public spending as part of the bailout programme. It also seems that Syriza’s domestic political opponents are growing in confidence.

Campaigners in Mozambique call for non-payment of hidden debts (Jubilee Debt Campaign) – JDC have been warning of looming debt crises in low- and middle-income countries for some time.

Climate, Consciousness and Social Change (GlobalResearch) – “Those most affected by climate change are those least responsible: the poor nations and communities of color that have historically provided the natural and human resources for the enrichment of the privileged classes in the industrialized nations.”