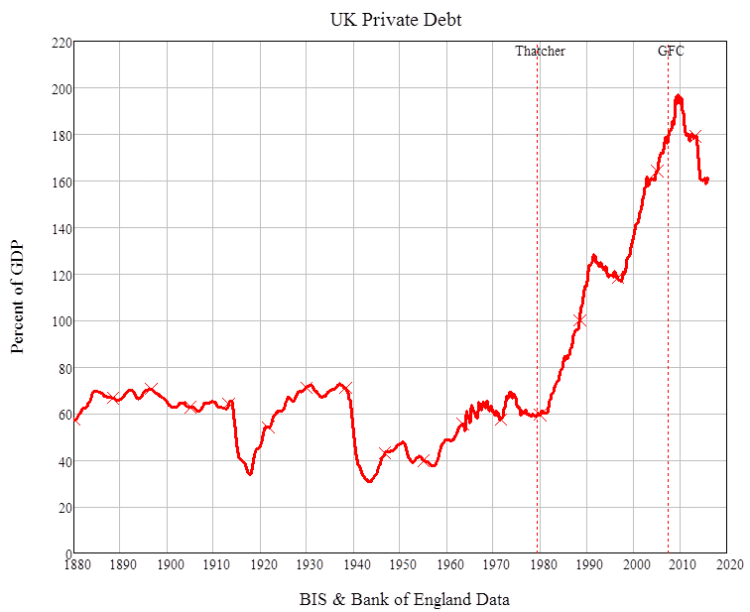 The Price of PFI? Debt, Fire, Unsafe Hospitals and Collapsing Schools (The People vs PFI) “In Manchester, the Central Manchester University Hospital is repaying £3.3billion for its PFI Hospitals, despite 380 documented fire safety failings which the contractor Catalyst Healthcare refuses to take financial responsibility for, dumping further costs on local taxpayers.”

The Incalculable Cost of Our Aversion to Government Debt (Notes on the Next Bust) “Even without the help of a scaremongering press and irresponsible politicians, it is not hard for the people on the low wages to make the link between their low wages and rising house prices, and the incoming immigrant population. In 2005, when there was a peak of immigration, wages were still rising. Not so this time. The difference; in 2005 there was enough money flowing through the economy that productivity was rising and wages were rising too. Since 2010 this money has stopped and wages have stagnated.”

What Next After Brexit? (Forbes) “The UK became the best place for money laundering, and it still is. The growth in UK private debt tells this story very starkly. Before Thatcher, there was no trend to private debt; after her, it skyrocketed, and it grew even more in the expansion phase of the Euro. Now it is contracting, and this debt overburdened and generally contracting private credit system is the main threat to the UK’s economic prosperity, not Brexit.”

Greeks Protest European Austerity One Year After Showdown With Lenders (HuffPo) “…the protest was a reminder that the wave of Euroscepticism sweeping the continent is as much rooted in anger over the EU’s program of fiscal austerity and disregard for public opinion as it is in xenophobia and concern about immigration.”

Populist Politicians Take On Italy’s Massive Debt Pile (Bloomberg) “Five Star’s leaders have used debt as an issue that sets their party apart from Renzi’s. The movement says banks and special interest groups encouraged governments at the national and municipal levels to borrow beyond their means. At one point Raggi even hinted some of the debt shouldn’t be paid—echoing Grillo’s contention that the pile of loans is “immoral”—but she quickly backtracked after rivals accused her of scaring off investors.”

Warning as average student debt set to double to £20k within three years (Daily Record) “The warning by Audit Scotland comes a decade after the SNP vowed to “dump the debt” before dropping their promise in government.”

Reclaim Local Democracy From The Clutches of The Financial Sector (DRUK) The window for publicly inspecting the accounts of UK local authorities, and for lodging objections to illegitimate borrowing in the form of LOBO loans, opens soon. Find out how to take action on the relaunched Local Authority Debt Audit website.