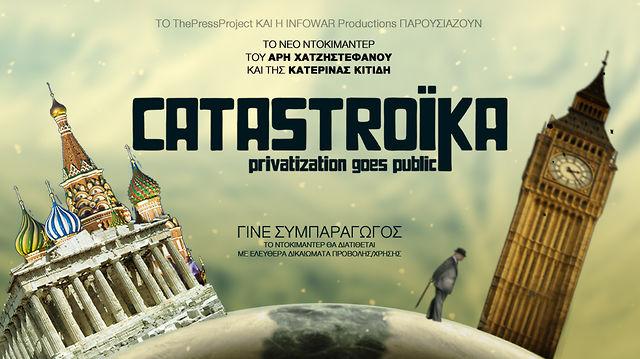 We’re holding our second film night at the Hive Dalston on Tuesday 23 February. Join us to watch Catastroika, followed by speakers and discussion on anti-privatization struggles in Greece and the UK today.

It was at the beginning of 1989 when the French academic Jacques Rupnik sat at his desk, in order to prepare a report on the state of the economic reforms in Mikhail Gorbatsov’s Soviet Union. The term that he used in describing the death rattle of the empire was “Catastroika”.

In Yeltsin’s time, when Russia instituted maybe the biggest and least successful privatization experiment in the history of humanity, a group of Guardian reports assigned a different meaning to Rupnik’s term. “Catastroika” became synonym of the country’s complete destruction by market forces; the sell off of public property; and the steep deterioration of citizens’ living standards.

Now, Catastroika’s unit of measurement was unemployment, social impoverishment, declining life expectancy, as well as the creation of a new cast of oligarchs, who took over the country’s reins. A few years later, a similar effort to massively privatize public property in unified Germany (which is presented as a model for Greece) created millions of unemployed and some of the biggest scandals in European history.

From the makers of Debtocracy, Catastroika presents images, information and material on deregulation and privatization programs that have been implemented at the so-called “developed” world. They use this material to explore what has been happening to Greece.

About Debt Resistance UK:
We are a group challenging exploitative lending practices and the legitimacy of our debt-based economy in pursuit of a truly democratic economic system.