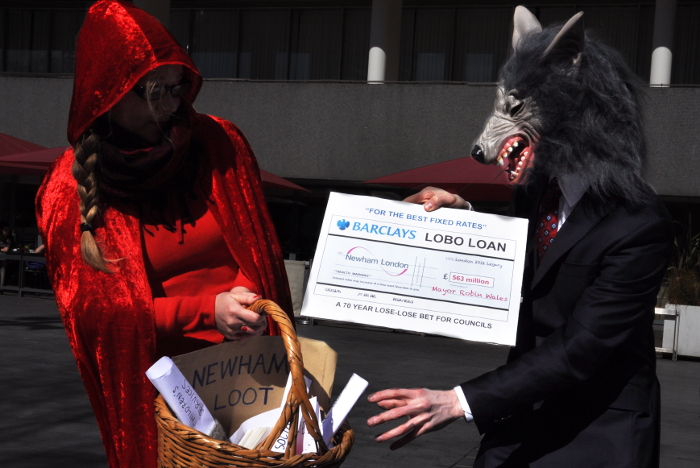 After missing another post I’ve decided to publish these debt news round-ups on an altogether more achievable two-weekly schedule instead of one per week. I’ll try to up the link-count to compensate.  As always, please send any interesting debt stories to info@debtresistance.uk, tweet them @DebtResistUK or drop them on Facebook.

Take back control of your Council from the Banks (#NoLOBOs) – The #NoLOBOs campaign gathers pace with residents in local authorities as far afield as Edinburgh, Manchester and Brighton taking action against predatory bank lending by lodging objections with their local auditors. Find out how you can follow suit and help reclaim your Council from the clutches of the City.

50 Councils face residents’ objections to LOBO loans (Municipal Journal) – See? What did I tell you? Unfortunately you’ll have to take the title at face value as you’d need a subscription to the MJ read this article.

‘Losing my maintenance grant means £80,000 of debt, It’s daunting’ (Guardian) – As of the 1st August poor students in the UK can no longer claim maintenance grants to help them with the cost of their studies, but will have to rely on additional loans instead. A selection of students give their views in this article.

The Graduate Premium: manna, myth or plain mis-selling? (The Intergenerational Foundation) – The prospect of higher earnings after graduating has been used by politicians to sell students on incurring big student loan bills. But do those higher earnings actually materialise? And if so, do they more than cancel out the cost of interest payments on the debt? This report sheds new light.

A note to John McDonnell’s economic adviser on fiscal rules, and their desirability (Tax Research UK) – Tax expert Richard Murphy criticises the idea of the government having a rule to balance the budget, as John McDonnell is proposing. With arguments inspired by Modern Monetary Theory, he says that any rule which demands balanced budgets also inevitably demands austerity at some point.

Richard Murphy and the Fiscal Credibility Rule: a reply (Medium) – James Meadway, adviser to McDonnell, responds to Murphy’s criticism, adopting the haughty tone of an economist in a Twitter war which we’ve all come to know and hate. As you’ve probably guessed, I’m siding with Murphy on this one (and, I think Steve Keen, whose refutation of the household budget model we’ve linked to before). I’ve yet to see any evidence that the UK government can’t borrow as much as it likes, inflation-permitting. New advisers, please!

The European Revolt Against the Neoliberal (TRNN – video) – “Catarina Principe, co-editor of Europe in Revolt, says a left movement against austerity must pursue the restructuring of public debt, nationalization of key sectors, and public control of the banking system, but none of this can be done within the European Union.”

IMF swayed by politics during Eurozone crisis, say inspectors (FT) – Gee, whodathunkit? The IMF’s executive board and the technical staff are increasingly at loggerheads over strategy. Remember this IMF-produced critique of Neoliberalism from earlier this year?

Why the Crisis in Italy is Not Over (Naked Capitalism) – Another RealNews video on why the recent rescue of troubled (as in, drowning in bad loans) Italian bank Monte Dei Paschi is a mere sticking plaster on a major flesh wound. I’ve linked to the video via NC because Yves Smith has important caveats about viewing the Eurozone crisis as a crisis of labour ‘competitiveness’.