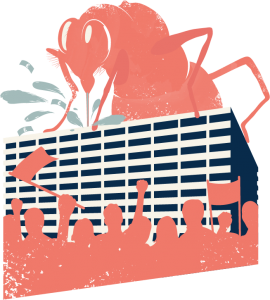 Private Finance Initiative (PFI) schemes were introduced to the UK under the John Major Government in the 1990s, with the first PFI project [Skye Bridge] field tested in Scotland. PFI was significantly expanded under Tony Blair’s New Labour Government who wanted a convenient way of funding public infrastructure “off balance sheet.”

Rather than Central Government directly funding infrastructure works likes schools or hospitals, PFI sees a consortium of private sector banks and construction firms finance, own, operate and lease back public infrastructure assets to the UK taxpayer, over a period of 30-35 years.

PFI financing of public infrastructure is now in use across the NHS, Departments for Education, Local Government, Defence, Transport, and Justice with over £305 billion in PFI repayments now owed by the UK taxpayer across 700+ projects for the next 30 years.

PFI deals have been universally criticised as horrendous value for taxpayers, likened to “paying for a hospital on your credit card” by BBC Panorama. Therefore it’s great to see a public movement building to fight back against the scam that is PFI.

At The People vs PFI Conference Saturday 1 November at the London School of Hygiene and Tropical Medicine, grass roots activists, medical practitioners, campaigners, PFI housing residents and PFI academics came together to discuss the UK’s PFI problem, and to find ways of organising locally to demand solutions to PFI.

Workshops focussed on practical skills for campaigning including: getting stories into the media with Nick Mathiason (TBIJ) and John Lister, movement building with Debt Resistance UK, Focus E15 mums and UK Uncut, use of FOIA to search PFI contracts with Sid Ryan and TCIJ, Follow the money with Tamasin Cave (Spinwatch) Nick Deaden (WDM) and Dexter Whitfield, and PFI contract monitoring with Stuart Hodkinson.

PFI rewires the relationship between the citizen and the state, so that our public services are no longer owned by, or directly accountable to us.

Because private finance is used not Government borrowing, PFI is significantly more expensive than Government funded projects with the cost of borrowing at least 2x higher than Government financed works according to a 2011 HM Treasury Report.

Yet despite frequently calling for an end to “Labours flawed PFI program” whilst in opposition, in 2011 Chancellor George Osborne rebranded and continued the PFI gravy train, under the “PFI 2” banner.

With the number of NHS Trusts in financial trouble having doubled in the last financial year – it is up to us to call an end to the madness of PFI. Follow our media platforms to find out about the next steps of the campaign:

Also check out the #PPLvsPFI conference Storify to read more on the PFI conference and follow the #PFI hash tag for the debate online.