Syriza, Greece and Government debt restructuring. Could it happen here..? 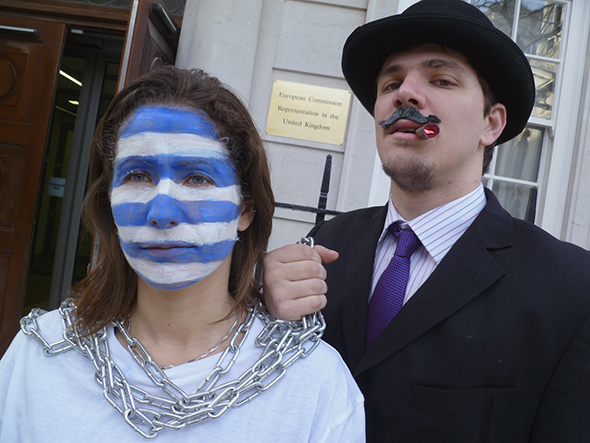 As the newly elected Syriza Government make overtures to the so-called Troika of the ECB, EC and IMF on debt restructuring, one thing is increasingly clear.

Elites in the UK and across Europe appear deeply uncomfortable the neoliberal logic of the “free market” is being questioned by a democratically elected Government, freely expressing the will of the long-suffering Greek people.

For those who sat through the car-crash Emily Maitlis interview for BBC Newsnight – accusing the Greek Finance Minister Yanis Varoufakis of “sabre rattling” for daring to renegotiate Greek debt, the hostile tone that greets BBC guests daring to question the ‘neoliberal consensus’ is quickly apparent.

London remains, the most important financial centre on the planet. The City of London effectively writes its own policy and regulation. Through The City UK, the British Bankers Association and HSBC’s Rona Fairhead, it pulls the strings of the BBC.

For the most part, the three major UK political parties simply nod along with this charade, collecting their cheques.

For people watching events unfold from the UK, the notion a tiny sovereign nation like Greece, tied to the fiscal straight-jacket of the EU, could take on the ECB, The City of London, Deutsche Bank and Angela Merkel, oppose the ‘fiscal water-boarding’ of austerity and win seems absurd.

As a nation governed in the interests of the City of London, do the UK media ever stop to question the legality and legitimacy of Greek bank debts? 90% of the Greek “bailout” loans have gone straight to French and German banks! 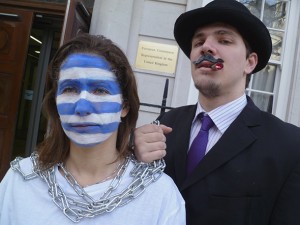 For a creditor nation such as the UK, the morality of “paying ones debts” runs strong. Yet look carefully at our own financial history and you will find precedents where the UK has defaulted on its debts – much like Greece seeks to renegotiate now.

One of the more outlandish, yet poorly known examples of UK default is a landmark 1989 legal battle between Hammersmith and Fulham Council vs the American banking behemoth Goldman Sachs.

137 Councils including Hammersmith had been encouraged to enter into multiple “interest rate swaps” – where the council exchanged floating interest rates with a bank, for the “security” of a fixed rate. Or so they thought.

Hammersmith, the largest player in the interest rate swaps market had signed hundreds of swaps contracts placing UK taxpayers on the hook for $9.5billion in potential losses as interests rates moved against the council in favour of Goldman Sachs.

Terrified council executives were quickly phoning the Audit Commission, Big Four Accountants and City law firms for expert advice as to their options to extricate themselves from a growing budgetary black hole.

UK Government as the “lender of last resort” to councils via the Treasury Public Works Loan Board (PWLB) took a keen interest in the case, as the debts mounted and council defaults and Government bailouts to pay the banks became a realistic proposition.

The case was further complicated because some councils had “guessed right” with their interest rate bets, and were profiting handsomely from the trades, whilst others, such as Hammersmith taxpayers faced a potential bill of some 6.2 billion!

Ultimately, the matter was decided in the UK High Courts, were QC’s scouring over the fine print of the 1972 Local Government Act ruled that councils entering into stand-alone swaps and derivatives contracts was “ultra-vires” or outside of the councils legal powers. Whether the British courts would have reached the same conclusions were it Greek and not British taxpayers on the hook remains a moot point.

In the Hammersmith case, UK High Courts ruled it was not council’s role to be speculating upon interest rates, and taxpayers should not be held liable, much to the anger of bankers in Wall Street and the City of London. 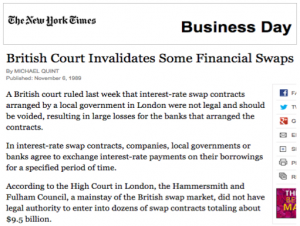 However take a look at the “devils derivatives” deal handed down by Goldman Sachs to bring Greece into the Eurozone and this is precisely what has happened there. Far from having the offending contracts “invalidated” by the EU courts, Greek taxpayers were left on the hook for the full amount of debt – largely owed to German and French banks.

The same story has played out in Italy, Spain, Germany and France where London based banks have systematically mis-sold swaps and derivatives contracts to bumbling and inept Government officials, too lazy or corrupt to ask proper questions.

In the Hammersmith and Fulham case, the interest rate swaps contracts were invalidated, the British taxpayer and Government spared. Currently however, UK taxpayers are on the hook for £300 billion+ in PFI contracts and LOBO loans at councils like Newham, which feature interest rate derivatives similar in nature to those featured in the infamous Hammersmith deal.

Before passing judgement on the “lazy Greeks” as characterised in the right-wing British press, UK citizens would be well advised to survey our own back yard for odious bank debt, and to revisit the Hammersmith test case and reflect upon the likely implications had the full terms of billions of pounds in swaps contracts been enforced by UK courts, with UK taxpayers ultimately liable.